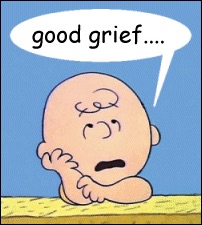 At some point in my early childhood, in my pretty, happy bedroom with the shaggy yellow carpeting, there was a Charlie Brown trash can with the exclamation, “Good Grief” bubbled over that big, round head. Of course I knew Charlie Brown, and I’d heard him lament in many Charlie Brown specials, but never did I know know what the word “grief” meant and, actually, I didn’t even know how to pronounce the word that was printed right there on my trashcan. I can’t imagine how many times I walked by and wondered “what does ‘griff’ (the way I pronounced it in my mind) mean, anyway?” I did finally put two and two together. I may be a little slow, but I catch on eventually.

No one wants to be an expert in grief, not based on personal experience, anyway. I certainly don’t consider myself an expert in it (and I’m content to leave it that way). However, since losing Mom six months ago, and especially since I started talking and writing openly about my journey, I sure have learned a lot about grief and our human reaction to it.

One thing I’ve learned is that grief is experienced in all types of situations. In death, of course, but also the loss of a relationship, or even the loss of a person as we knew them, before they were lost to something else like drugs or alcohol or some other thief. There’s lingering grief from losses long ago, and there’s even something called “anticipatory grief,” a companion I knew all too well for years as Mom fought her illness. A friend encouraged me to follow a Facebook page called One Fit Widow. I’m not a widow, but I learned immediately that loving encouragement after loss does not discriminate. It’s all good.

I also learned that God is the best window washer ever! They say the eyes are the windows to the soul, but they are also our window to the world. Two months ago, my windows had a four-month thick layer of gunk on them, making it hard for me to see clearly…hard to see the full beauty of the world around me, and hard to look ahead to the future as I pondered how to move forward after losing Mom. So, four months into the grieving, I retreated to a favorite coastal get-away, all by myself. A first for me and also a first for my family.

With everyone’s support, I packed my bags and gathered up my tools for a self-led “visioning retreat.” Pulling a rolling cart into my ocean-front hotel room, I brought along my bible and a study about loss, a stack of magazines and a blank poster for creating a vision board, a novel, and my trusty iPad. Oh, and my running shoes. I didn’t really expect to get to everything, but I wanted to be prepared.

If you come away from any kind of a retreat with at least one single, solid, viable gem, I’d call that a success. My retreat was definitely a winner. I did get to everything in my basket, and then God filled my heart with lots of gems (including a visit to a monarch butterfly grove!).

During those two days, I literally came to see the world differently. The sun shone brighter, the ocean water was bluer, landscape was more colorful. The butterflies were “oranger.” And I was more in touch with myself than ever before. Finally, my years-long desire to write, really write, began with a short outpouring that became my first-ever blog post. Not only has writing helped me to know myself better, it has put me in touch with so many other wonderful people, near and far, who happen to be grieving, too! I have come to realize that, while grief is different for everyone, it’s the same in a lot of ways, too.

As great as the November window washing was, every window in the world needs to be washed more than once. Keeping my window clean is, indeed, an ongoing process. Sometimes it’s a bible study, sometimes a visit to the beach, sometimes a run with my girlfriends, and sometimes it’s just a good cup of coffee with my favorite cousin. But always, we remember that “grief” is not a “four-letter word.” It’s ok to say it, it’s ok to talk about it, it’s ok to share it.

5 thoughts on “Grief is Not a Four Letter Word”