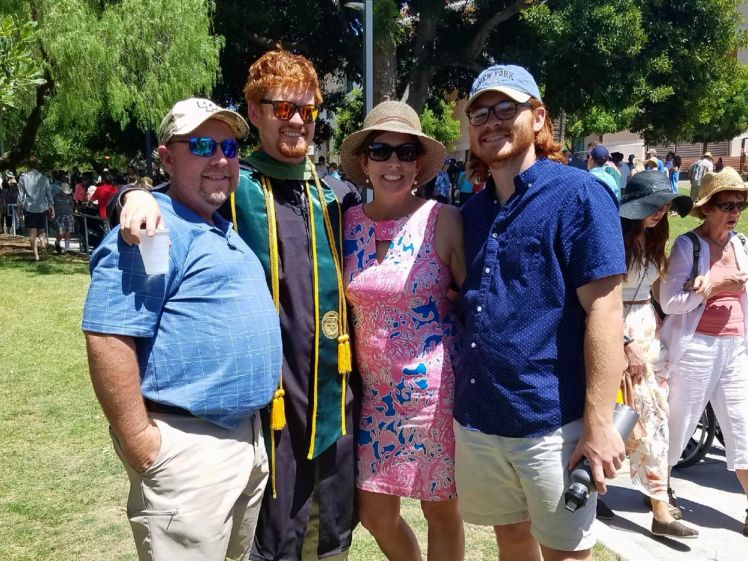 Three Scott family celebrations collided this weekend, creating a crazy combination of chaos, reminiscence, and pure joy.  It all started with our Jake’s 24th birthday dinner on Friday, a weekend of fun, food, and a little drink with friends and family.  It all culminated today with Jake’s master’s degree graduation ceremony and his dad’s Father’s Day, all rolled up in one.

As my hubby Darren dozes on the couch, and Jake and his younger brother Zack are elsewhere (recovering from the weekend on their own), I’m left to think back on some of the milestones that led to this special Grad and Dad weekend…

Two weeks overdue, and after 24 hours of labor, Jake finally exited the “rumpus womb” and made his debut on June 16, 1993.

“Looks like you have a redhead!” Dr. Owens exclaimed.  Huh?

I’m not sure how we were surprised (I come from a long line of redheads) but we weren’t expecting to have our own copper top, especially one with brown eyes!  Jake has continued to surprise us ever since.  Between his exhibitions of near-genius proportion, his thirst for knowledge and understanding, and his overall loveable personality, Jake has made life interesting.

I could go on forever, but today…

…after six years at Cal Poly, San Luis Obispo, Jake has graduated with his master’s degree in Kinesiology.  A new chapter begins.

As I look ahead and think about Jake’s future, I’m realizing that it’s less about “what Jake will be,” and more about who he is and what he stands for right now.  His character, his kindness, his curiosity, and his determination are already at the core of Jake Scott, and he’s ready to launch.

Wherever that takes you, Jake, whatever you “become,” you’re already a success in our book because of who you are…right now.

3 thoughts on “College graduation and the true measure of success: Is it “who you are” or “what you will be”?”